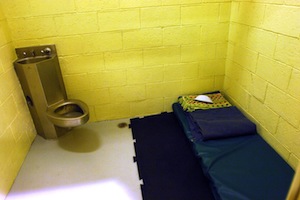 An 11-year-old boy was released from a detention facility in the desert in New Mexico last week after it was discovered that he was an American citizen.  The boy was kept at the Artesia facility for over a month before his legal status was uncovered by an immigration attorney who just happened to be there on a visit.

The child’s father is an American citizen and the boy had arrived with his mother from Central America before they were both placed in detention.  “I don’t think they asked him the right questions,” notes attorney Stephen Manning.  “He should never have been there.” The Department of Homeland Security declined to comment.

This case highlights the problems being faced by federal officials trying to speed up the process of dealing with tens of thousands of undocumented immigrants ‒ many of whom are unaccompanied minors or single parents with kids ‒ fleeing to the United States from Central America, notes immigration attorney Laura Lichter.  She is one of many lawyers allowed access to the facility in Artesia to provide the detainees with free legal counsel.

“I think the fact that a US citizen was detained and for this long before anyone actually realized that there was even the possibility they had detained a US citizen shows you just how much respect and attention is being given to people’s cases,” Lichter stated.