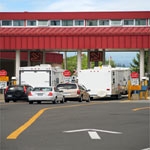 While it is a controversial idea, it relies on a simple concept: that all immigration is simply a matter of trade and economics. That is, both documented and undocumented immigrants cross borders to bring their skills and labor to markets. When immigration occurs, there are more workers and therefore the economy becomes richer. Some also believe that by opening borders other countries will need to work harder to create attractive economies in order to retain their own best workers. Proponents of open borders point to the example of the EU, where workers from different countries can cross borders freely to take part in different economies.

Opponents of open borders argue that undocumented immigrants harm the economy, take advantage of social welfare systems, commit crimes, and harm property rights. Some argue that opening borders would allow anyone into the country – including those who wish the country ill and those who have no intentions of following local laws.

Advocates of open borders note that immigrants cannot take jobs from US citizens and green card holders because the number of jobs is fluid and more immigrants create more economic stimulus, creating more jobs. Advocates also note that immigrants, including undocumented immigrants, still pay corporate taxes, property taxes, sales taxes, and payroll taxes, ensuring that they pay for any social welfare programs they use. Advocates also note that residents and even citizens also violate rights and commit crimes, so allowing undocumented immigrants into the country does not simply introduce crime and issues into the country. Advocates of open borders argue that the reasons behind crime are much deeper than immigration.

Advocates of open borders note that there are already over 10 million estimated undocumented immigrants living in the US and thousands more enter the US every day. Many experts note that the reality of open borders is already here, but that lawmakers are simply ignoring the facts. The news reports are filled with stories of underground tunnels under the borders and unprotected border areas where entire families cross the US border. Deporting the millions of undocumented immigrants already in the country, many point out, is logistically impossible and would only result in financial chaos.