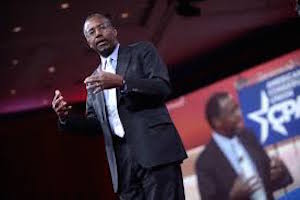 Ben Carson, another in the ever-growing list of presidential hopefuls in the Republican Party, was the only one to answer the call by the National Association of Latino Elected and Appointed Officials (NALEO) for a speaker, on Wednesday. In his speech to 6,000 Latino leaders and officials from across the United States, Carson attempted to play down the importance of the issue of immigration within the Latino community while maintaining the party line.

“A lot of people told me what I should talk about when I came here – they said Latino elected officials? You need to talk about immigration,” Carson revealed, adding: “Give me a break! People have a vast variety of things that they’re interested in and to pigeonhole people into one area I think indicates something more about the person doing the pigeonholing.”

Carson continued to toe the Republican line on the need for stricter border control; however, he claimed that he thinks the border should be sealed to prevent potential terrorists entering the country rather than because he has a problem with foreign immigrants per se. In November a Latino Decisions poll found that immigration was a higher priority for Latinos than other issues; however, just one month before, a Pew Research poll saw Latinos putting a greater emphasis on the economy and education, indicating that Carson may perhaps have had a point.

Carson has previously made no secret of his disapproval of the executive action taken on immigration reform by President Obama.