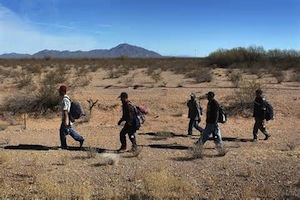 Federal immigration authorities have for years been proclaiming the success of the annual increase in the deportation of undocumented immigrants or immigrants who have been found guilty of serious crimes; however, the reality is that the number of deported immigrants illegally finding their way back to the United States has also increased.

Although the number of illegal re-entries is not as high as the number of deportations each year, over time the erosion of any gains made in immigration enforcement is clear, with almost the same number of people deported back in 2012 having now returned to the US. Experts say that the figures show that not only are the claims of enforcement success dubious but also that they highlight the inefficiency of border controls.

Around 25% of all immigrants detained every year by immigration authorities have already been deported from the United States at least once, according to Jessica Vaughan and Dan Cadman from the Center for Immigration Studies. Federal immigration officials declined to comment on the findings, although a statement from Immigration and Customs Enforcement re-emphasized its focus on immigrant criminals returning to the US rather than those who simply lack official documentation.

Activists for immigrant rights say that deported immigrants are returning to the country in such huge numbers for the simple reason that the United States is now their home. “They come back because they built their lives here,” says Francisco Portillo of the Francisco Morazan Honduran Organization.  “They found a good future here. They come back because they left family members behind, children, wives, husbands, and the lack of jobs and the violence in our countries also play a role in making them return.”