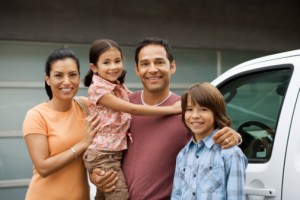 Several months ago downtown Tucson’s Greyhound station was filled with immigrant mothers and children who had just crossed the border and volunteers were waiting to assist them with donated clothes and food. Today, with fewer families crossing the border, they are dropped off by immigration officers at the church-owned Casa Alitas before eventually being moved elsewhere in the United States.

The decrease in the numbers of immigrant families and unaccompanied minors has been attributed by the US government to a strong international campaign to try to deter unlawful immigration and to more detention space and greater enforcement efforts by Mexico. Immigration and Customs Enforcement now runs two detention centers that have been permanently erected in Texas for the purpose of housing immigrant families. The facility in Karnes can house 1,200 people, while the Dilley center will have 2,400 beds. 300 and 473 parents and minors were being held in Dilley and Karnes respectively as of January 15th.

Humanitarian parole is still seeing the release of a number of families in Tucson, though Immigration and Customs Enforcement is keeping quiet about the selection criteria required for such release. Officials from Customs and Border Protection say that families from Mexico not looking for asylum have their removal expedited or are referred to ICE.

621 families have been apprehended at the Tucson sector border so far in the current fiscal year. Many of these were sent to Arizona for processing and given humanitarian parole due to lack of space.