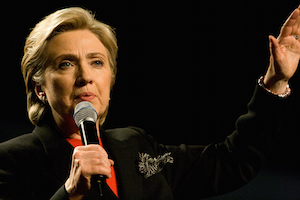 Democratic presidential candidate Hillary Clinton would expand President Obama’s executive actions on immigration reform if elected to the White House next year, according to Robby Mook, her campaign manager. Mook made the comments during a panel hosted by Politico on Friday night at Manhattan’s New York University.

Mook says that Clinton wants to go even further on the issue than Obama and wants to prevent the deportation of parents of Dreamers who contribute to the US economy. Clinton intends to make it simpler for families to appeal against certain decisions regarding deportation and it was just last month that she vowed to support the idea of offering a pathway to US citizenship for undocumented immigrants who already live and work in the country.

“We can’t wait any longer for a path to full and equal citizenship,” Clinton told Dreamers on May 5th, following up this bold statement by declaring her support for the idea of allowing some undocumented youngsters to become a part of the US military. “Hillary Clinton is committed to comprehensive immigration reform to strengthen families and our country,” claims Amanda Renteria, Clinton’s national political director.