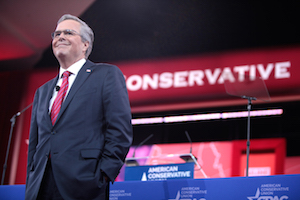 Jeb Bush has only just announced his decision to run for the post of Republican presidential candidate in the 2016 election; however, he has already raised eyebrows by declaring his support for immigration reform in an unscripted response to a protest by a number of immigration activists annoyed by his apparent ‘flip-flopping’ on the issue in the past.

Bush’s announcement speech in Miami was interrupted by a group of immigration activists wearing shirts with the slogan ‘Legal status is not enough’.  Bush surprised attendees by deciding to address the protesters and told them that “the next president of the United States will pass meaningful immigration reform so that that will be solved – not by executive order,” which resulted in a round of applause.

Bush has previously voiced his opposition to the deferred action programs created by President Obama via executive action; however, he insists that he wants to see immigration reform enacted by legislation. He has previously voiced support for the idea of offering citizenship to undocumented immigrants, only to alter his stance to support a pathway to legal status that could eventually lead to citizenship after criticism from others in the Republican Party.

Homestead ERA member Mariana Martinez, who was among the various immigration groups protesting, is one of those who have criticized the former Florida governor for his changing attitudes. “He’s also stated his support of reform with legalization for the undocumented community, but of any immigration reform we demand full and equal citizenship that doesn’t leave millions of our loved ones in a permanent second-class status,” she says.