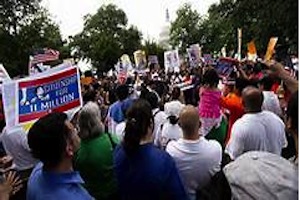 Immigrant rights groups, including the American Immigration Council (AIC), are involved in a lawsuit against the US government. These groups are suing the government on behalf of undocumented immigrant minors, who the groups say are not being provided with acceptable legal representation. The AIC says that the fifth amendment’s due process clause is being violated by the Obama administration, as are the provisions in the nationality act that make it clear that defendants are entitled to receive “a full and fair hearing” in front of the justice system.

The current immigration system in the United States sees minors subjected to the same laws regarding deportation as adults, meaning that they must give their own legal defense and prove that they have a right to remain in the country.

Since October 31st last year, more than 66,000 unaccompanied immigrant minors have crossed the US border from Mexico. For financial reasons, thousands of these minors end up dealing with the country’s immigration system on their own, with fewer than 10% ultimately winning their cases. American Immigration Council lawyer Beth Werlin believes that this situation violates the constitution.

“How is a child supposed to bring in the evidence, bring in witnesses, make legal arguments?” Werlin asks. “Immigration law is not ‘check a box’ simple. There are thousands of cases in the court of appeals interpreting how the statutes should be read. Who qualifies, who doesn’t; there are discretionary aspects you need to prove as well, trying to show your personal equities. These are not things that a child can do on his or her own.”