The Naturalization Process and Current Trends in Immigration in the United States: By Gender, By Age and By Marital Status

Historical trends have shown that the average number of persons that are naturalized annually has increased from less than 120,000 during the 1950s and 1960s to 210,000 during the 1980s, to 500,000 during the 1990s, and to 680,000 between 2000 and 2009. Naturalizations rose sharply during the mid-1990s because of various factors that include: 1) the 2.7 million undocumented immigrants legalized under the Immigration Reform and Control Act (IRCA) of 1986 making them eligible for citizenship; 2) legislative efforts to restrict public benefits for non-citizens; and 3) the implementation of a mandatory program requiring replacement of permanent resident cards issued before 1977.

Until the 1970s, the majority of persons that were naturalized were born in European countries. The regional origin of new citizens shifted from Europe to Asia due to increased legal immigration from Asian countries, the arrival of Indochinese refugees in the 1970s, and the historically higher naturalization rate of Asian immigrants. Since 1976, Asia has been the leading region of origin of new citizens. 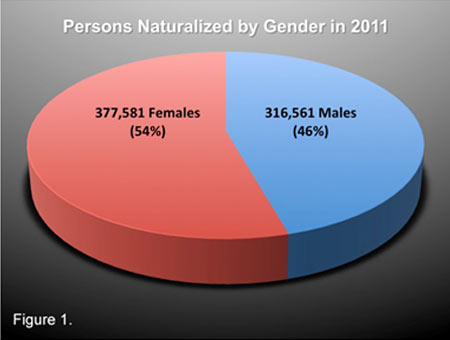 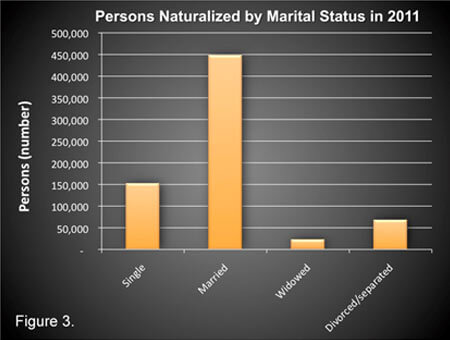 Persons naturalizing in 2011 spent a median of six years in legal permanent resident status before becoming citizens. Immigrants born in Africa spent the least time in legal immigrant status (5 years), followed by immigrants from Asia, Europe, and South America (6 years), Oceania (7 years), and North America (10 years). The median years spent in LPR status was unchanged overall from 2010 to 2011 but increased by one year for persons born in Asia and South America.