The Naturalization Process and Current Immigration Trends in Immigration the United States: By State and By Metropolitan Area

The naturalization process is one by which legal permanent residents obtain U.S. citizenship after fulfilling the requirements established by Congress in the Immigration and Nationality Act (INA). Once a foreign-born citizen becomes a U.S. citizen, they enjoy nearly all the same benefits, rights and responsibilities that the Constitution gives to native-born U.S. citizens, including the right to vote.

Every applicant who applies for U.S. citizenship and who is 18 years of age or older must file an N-400, Application for Naturalization. One of the steps in the naturalization process requires knowledge of the English language and the history of the United States. In fact, in most cases, an USCIS officer verifies an applicant's understanding of the English language, as well knowledge of the history and government of the United States. Applicants who pass these exams are determined to be qualified for naturalization and are scheduled for an oath ceremony before a judge or before an officer delegated to administer the oath by the Secretary of Homeland Security. Seventy-three percent of all persons that were naturalized in 2011 resided in 10 states (Figure 1), with California having the largest percentage of persons naturalizing (22 percent), followed by Florida (13 percent) and New York (11 percent). Fifty-one percent of the 694,193 new citizens in 2011 lived in 10 metropolitan areas. The leading metropolitan areas of residence were: 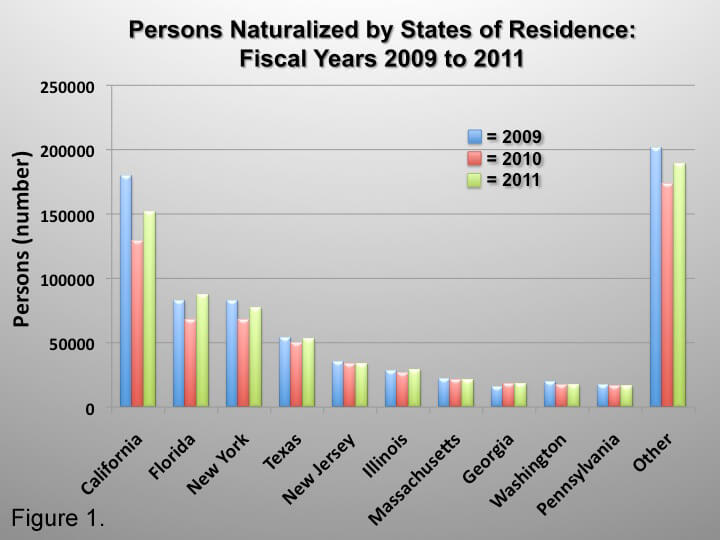