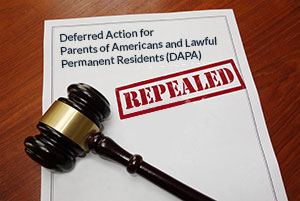 Deferred Action for Parents of Americans and Lawful Permanent Residents, well known as DAPA has been rolled back. This program was proposed by the Obama administration in 2014. DAPA’s aimed at protecting parents of children who are either green card holders or U.S. citizens from deportation. This program was never implemented as it was blocked by a federal court in 2015. Now, John Kelly, the Secretary of U.S. Department of Homeland Security (DHS) has signed a memorandum, formally revoking the DAPA program.

According to the Migration Policy Institute, around 3.7 million immigrant parents would have received the benefits of DAPA, if it had been implemented. One must be the father or mother of a U.S. citizen or a permanent resident to be eligible for temporary immigration status under the rescinded 2014 memo. This program was not meant for those who came to the U.S. after January 1, 2010, and those with any criminal records. With these requirements, the Obama administration hoped to offer temporary immigration status to around 4 million undocumented parents. This program would also have helped the beneficiaries to gain authorization to work in the U.S.

DAPA is not the same as Deferred Action for Childhood Arrivals (DACA). DACA is meant for the undocumented immigrants who came to the U.S. as children. This program which is still active allows the recipients to gain temporary immigration status and get work permits. This program was implemented by the Obama administration in 2012. Around 750,000 immigrants have received DACA so far.