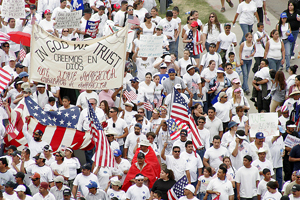 President Obama took a historic step when he announced his immigration reform plan that would protect around four million undocumented immigrants from deportation. Undocumented immigrants in the U.S. have long been fighting for such a relief. By signing a presidential memorandum tomorrow at a rally in Las Vegas, he will finalize his executive actions.

The President’s primary focus in on keeping families united. The biggest group of undocumented immigrants that will be benefited is approximately four million undocumented adults who have children who were born in the U.S. or who hold green cards. These undocumented adults will need to establish that they are not criminals and that they have lived here for five years. If they are found to be eligible, they will be granted temporary legal status and employment authorization documents. These immigrants also must be willing to pay their back taxes to qualify for relief from deportation.

The other group of undocumented immigrants that will benefit is the DREAMers. They are the ones who came to the U.S. as children and are currently in school or who have served in the U.S. military. The new immigration rule will benefit more than 270,000 so-called DREAMers. A total of four million undocumented adults and youth will receive temporary legal status under the President’s new executive action.

President Obama stated that he agrees that the undocumented immigrants must be held accountable for breaking our country’s immigration laws but at the same time it is impossible to deport all the 12 million undocumented immigrants from here. That is one reason why he is planning to focus on deporting those who pose a threat to the country’s security and not families and children. He said that these immigrants have been here for a very long time and most of them work hard in low-paying jobs. A majority of them have spent most of their lives in the U.S. just like the Americans.

It must be remembered that the President’s executive action will only grant these immigrants temporary relief from deportation and that it will not create a pathway to U.S. citizenship or grant them access to federal health care benefits.