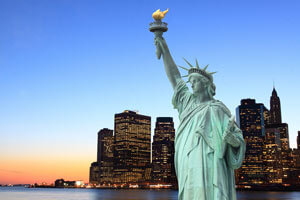 Other Ways to Immigrate to the U.S.

The most common way to immigrate to the U.S. is to be sponsored by a relative who is a U.S. citizen or green card holder. U.S. citizens can sponsor their husband or wife, parents, children, brothers and sisters. Green card holders can only sponsor their husband or wife and unmarried children below the age of 21. They can't sponsor their parents, brothers or sisters. Husbands, wives, parents and children of U.S. citizens are the sponsors immediate relatives. Immediate relatives can get immigrant visas immediately and don't have to go on a waiting list. Once their sponsor's petition is approved, they can apply for an immigrant visa right away. This is because the U.S. has no limit on the number of visas that it will give to immediate relatives. Your sponsor must file Form I-130, Petition for Alien Relative, for you. Immediate relatives who are already in the U.S. can apply for their visa by filing Form I-485, Application to Register Permanent Residence or Adjust Status, at the same time as their U.S. citizen sponsor files Form I-130 for them. By doing this, immediate relatives can get their green card without having to return to their home countries to get an immigrant visa. There are a limited number of visas for the following people: The husbands, wives and children of green card holders The brothers and sisters of U.S. relatives The children of U.S. relatives who are married or more than 21 years old Unlike the immediate relatives of U.S. citizens, these people go on a waiting list once their sponsor's petition is approved. Then they have to wait for their priority date (the day that the United States Citizenship and Immigration Services (USCIS) accepts their sponsor's petition) becomes current before they can apply for their visa. Non-immediate relatives who are in the U.S. must leave the country if their visa expires before they are able to get an immigrant visa. You can check the U.S. Department of State's Visa Bulletin to see when your priority date will become current.

Foreign nationals can get an immigrant visa if a U.S. employer is willing to sponsor them for a green card and give them a job in the U.S. They can do this by filing Form I-140, Immigrant Petition for Alien Worker. The sponsoring employer also needs to file applications for labor certification.

Foreign nationals who make a $1,000,000 USD business investment in the U.S. (or a $500,000 business investment in a high-unemployment or rural area in the U.S.) that will create or preserve at least 10 permanent, full-time jobs for U.S. workers can get a green card. They don't need a sponsor. They can file Form I-526, Immigrant Petition by Alien Entrepreneur, to apply for a visa that would allow them to come to the U.S. and apply for a green card.

After the sponsor files the immigrant petition, the USCIS will review the petition to see whether the correct filing fee has been paid and whether the information on the petition is accurate. If the application packet is complete, the USCIS will send an application receipt notice to the sponsor, which lets them know that the USCIS will begin deciding whether to approve or deny the petition. If the application packet is incomplete in any manner, the USCIS will return it to the sponsor. If the USCIS approves the petition, it will send it will send it to the National Visa Center (NVC). for immigrant visa pre-processing. The NVC will give the foreign national who wants a visa a case number and a bill for the application fees they'll need to pay to apply for their visa. The foreign national also needs to send Form I-864, Affidavit of Support, to the NVC. This for needs to be filled out by their sponsor, who is making a promise to help their relative if they money while they're in the U.S. The NVC will hold the affidavit of support and the immigrant petition until a U.S. embassy or consulate schedules an interview with the visa applicant. Applicants who aren't immediate relatives will need to wait until their priority dates become current before they will get an appointment for an interview. They can find their priority dates in the USCIS's approval notice for their sponsor's petition. If the NVC needs additional documents, it will contact both the visa applicant and their sponsor.

Next the U.S. embassy or consulate will schedule your interview. The notice for this interview will tell you what medical exams you'll need to take. You'll need to bring proof that you passed your medical exams to your interview. You'll also need to bring your passport, birth certificate and two identical passport-style photographs of yourself. You might also have to bring other documents, such as your marriage certificate if you're married to your sponsor. A consular officer will interview you and review your documents. The visa interview will help the consular officer decide whether you're eligible for an immigrant visas. They will also take your fingerprints. The consular officer will give you your visa if you're eligible to immigrate to the U.S. This process is for visa applicants who are living outside the U.S. Applicants who are in the U.S. can apply for adjustment of status with Form I-485 to get their green card without having to return to their home country to get an immigrant visa.

Welcome to the United States: A Guide for New Immigrants