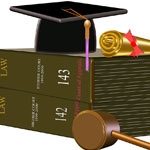 Some undocumented immigrants who were brought to the US as children have gone on to attend law schools in Florida, New York, and California. In some cases, they have passed their bar exams and have attempted to gain entry to their state bars, intending to work as attorneys. However, state bars in the three states prevent those who enter the country illegally from practicing law. The states are now being asked to re-examine their requirements to see whether someone has to be in the country with legal status in order to practice law in the US.

Some are opposed to having Garcia and other undocumented immigrants practice law in the US. Ira Mehlman of the Federation for American Immigration Reform, for example, has stated that it makes no sense to allow someone who is violating US laws to practice US law. Others oppose the idea because they feel that it would make it more appealing for immigrants to bypass the immigration system and come to the US illegally, since there are few long-term penalties for doing so.