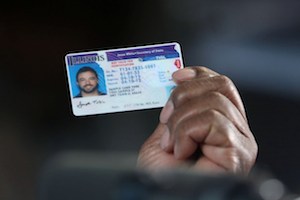 A new law in the state of Illinois has given undocumented immigrants over 1,200 driver’s licenses, an Illinois Secretary of State office spokesman says.  The licenses come under the category TVDL (Temporary Visitor’s Driver’s License), making them legal documents enabling immigrants that live in Illinois to drive regardless of their legal status.

The TVDLs were previously only available to people such, as the children or spouses of temporary workers, international students and long-term visitors, who are ineligible for a Social Security Number.  However, undocumented immigrants can now put in an application for a TVDL under the new law.  These licenses cannot be used as ID in order to vote, board a plane or purchase a firearm.  Undocumented immigrants that are granted a TVDL will have to put in a new application after a period of three years.

The license also looks slightly different from the normal driver’s license, with a purple stripe.  Although a number of applicants have been worried that the license would indicate their status as undocumented, this is in fact not the case; the only distinction is the purple stripe, which indicates no more than they are US visa holders that simply cannot gain a Social Security number.

The cost of the license is just $30 and there have already been over 30,000 applications from undocumented immigrants that live in Illinois.  Motorists that are undocumented still have to pass a driving, written and vision test and take out auto insurance.