Green cards are officially referred as permanent resident cards by the U.S. Citizenship and Immigration Services (USCIS). Resident Alien Card and Alien Registration Receipt Card are the other names that were used to refer to this card. It is also known as Form I-551. “Green card” is not the official name of this document but it took the name because of its colour when it was first introduced in 1950 and these cards were not always green.

It was only in 1940 that foreign nationals who came to the U.S. were asked to register within the U.S. The Alien registration Act of 1940 required all non-U.S. citizens to register with the federal government at post offices. This Act wanted them to document their presence in the U.S. Registration forms that were filed at post offices were forwarded to Immigration and Naturalization Service (INS). Once the forms were processed, INS mailed receipt cards, Form AR-3 to the registrants. Likewise, all those who came to the U.S. were required to register and there was no discrimination between legal and illegal immigrants. All those who registered were issued AR-3 receipt cards.

This Form I-151 was then used by immigrants to prove legal status in the U.S. This card that indicated that the holder has the right to live and work here legally was known as Alien Registration Receipt Card. As this name was quite long, people started to refer to the card by its colour and started referring to it as a green card.

In 1977, the INS issued a new version of the card. It was a machine-verifiable card like driver licenses and credit cards. These cards were issued with the holder’s signature and the Alien Registration Number. But this new document was not in green color and it did not have an expiration date. It was named Resident Alien Card. 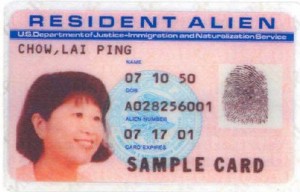 As there were different versions of the card, it was difficult for the U.S. employers to verify the identity of the holder. Considering this, the INS issued a new version of the card in 1989. These new cards had expiration dates. 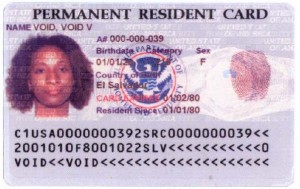 Again to counter fraud, INS issued a more secure card in 1997. This card was named “Permanent Resident Card.” This card had the Alien Registration Number and a unique card number. In 2004, the Department of Homeland Security seal was added to the card. This version of the card is still in use. The last cards issued will expire in 2020.

In May 2017, USCIS issued a new version of the green card. The re-design was a part of the Next Generation Secure Identification Document Project, according to the USCIS. This new card includes more security features. The older versions of the cards will remain valid until they expire.