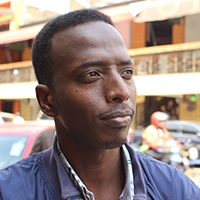 Every year, the U.S. government conducts a lottery program through which it gives away 50,000 green cards to foreign nationals. This program is known as the Green Card Lottery or the Diversity Visa Lottery (DV Lottery). Registration period for this program is generally open between October and November, every year.

The registration period for this program is generally open between October and November, every year. That is when signs advertising the green card lottery go up across the globe. This lottery program allows eligible winners to move to the U.S. by granting them immigrant visas.

The winners can also become Americans later. This is something that sounds strange to many. But, there are many who have obtained permanent resident status in the U.S. through this lottery program. Here is the success story of Abdi Nor, a Somali refugee who moved to the U.S. after winning the green card lottery. His story was first aired on the BBC show, Crossing Continents.

Adbi had been living in Little Mogadishu, one of the toughest slums in Nairobi, Kenya. He won the green card lottery in May 2013. He applied for the lottery along with two of his friends. His friends had not been aware of this program. Abdi made them apply for it by telling them that it was easy and didn’t cost much.

According to Abdi, the DV lottery program is the easiest way to immigrate to the U.S. For many like him, the green card lottery is a ticket to the U.S. As a refugee, Abdi did not have any other way open for him to come to the US.  He filed his application for the lottery at an internet café along with his two friends who were also dreaming about settling in the U.S. Abdi won the lottery but his friends were not so lucky.

Abdi had to make full use of this opportunity as he wanted to go out of Kenya. He was born in war and he did not know what peace was. He said that he is a survivor. Somali refugees really had a tough time in Kenya. He came to know about America when his father talked to his mother about the American forces that landed in Kenya. Americans who were there attracted Abdi. He felt America is a great country with great people. It was very difficult for him to lead his life in Kenya as a refugee. So all what he wanted to do was to get out of that place.

Police clearance is mandatory to all who wish to immigrate. The local police  check the fingerprints of the applicants with federal criminal records to make sure that they do not have criminal records. Abdi had a problem with getting a police clearance document from Kenya’s criminal investigative department. That was because the policemen were not friendly. The policeman he approached to get his document told him that he will need more than two months to check Abdi’s records as he was a refugee. But he got his police clearance a little early which made him happy.

The next step was the immigrant visa interview. Abdi was well prepared for his interview and had all the required documents organized in his small folder. An American lady interviewed him and rejected his visa as a signature was missing in one of his school transcripts. That was the worst day for Abdi as he felt that his American dream had collapsed. He regretted losing his chance of getting a U.S. visa. The embassy told him that he can send a signed transcript and that they will get in touch with him once they receive it.

Abdi was sad that he missed his chance and believed that he would never be able to go to the U.S. After a few days he received an email from the Embassy stating that his application was approved and that he had been issued a visa. That was his happiest day as he got his visa after a lot of uncertainty.

Abdi then left from Nairobi with a lot of dreams. He wanted to build a new life in America. He had a lot of surprises in the U.S. He said that there is no racism in America and the people are friendly. Abdi loves everything about the U.S., especially the roads, houses, the English language and the accent.