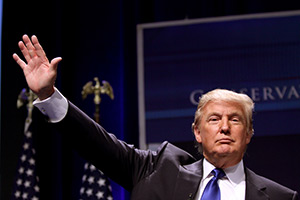 One of the Presidential Candidates who often makes headlines is the Republican, Donald Trump. His language and his views against immigrants and immigration are few things that have made him popular. Though he has many supporters, there are many who are against him for his views on immigration.

His controversial immigration plans include sending all undocumented immigrants living in the U.S. back to their home countries and constructing a wall on the U.S.-Mexico border.

Trump’s plan to build a wall between the U.S. and Mexico, will be another financial burden to the U.S. Trump says that he would make Mexico pay for the wall but Mexican Treasury Secretary Luis Videgaray said, “Mexico will under no circumstance pay for the wall Mr Trump is proposing.” To construct a wall, the U.S. will have to spend more than $10 billion. This cost is exclusive of other factors like labor, security, equipment and maintenance.

Experts say that if Trump were to build a wall on the roughly 2,000 miles long U.S.-Mexico border and deport all the undocumented immigrants living here, it would cost the U.S. tens of billions which will eventually be a financial burden to the country.