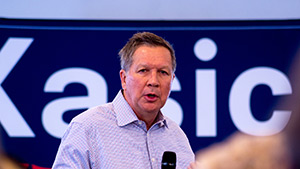 Here’s what John Kasich, Governor of Ohio, is saying about immigration:

BLITZER: The idea that we’re going to deport all these people is ludicrous and everybody knows it.” Those are your words. Should people be allowed to break the law just because it’s not feasible to stop them?

KASICH: Look, we have a great president here, George Bush, the 41st president of the United States. He worked with Ronald Reagan to pass an effort to try to solve this problem — a path to legalization. You see, that was a time when things worked. It was a time when President Reagan and George Bush decided that we needed to make the country work.

Look, I think there is an answer here. The answer is you complete the border. You let people know that once it’s done, you don’t have a right to come in. If you come in, we don’t want any excuse. You’re going to go back. But I favor a guest worker program. I think it’s practical. And I think for the 11 million or 11.5 million Americans — the illegals that are here, if they have not committed a crime since they’ve been here, I’d make them pay a fine, some back taxes, maybe some community service. And at the end, I’d give them a path to legalization, but not a path to citizenship. I don’t think we’re going to tear families apart. I don’t think we’re going to ride around in people’s neighborhoods and grab people out of their homes. I don’t think — first of all, I don’t think it’s practical and I don’t think it reflects America.

You know what happened? The problem with President Reagan is we didn’t get in there and actually finish the border. And I think it was probably business interests that affected it. But at the end of the day, let’s be practical. Let’s start solving problems in this country instead of kicking them upstairs. With President Reagan and George Bush, it was a bipartisan coalition to address the issue, and I think we can and should do it again. And I will have a plan in the first 100 days to get it done and get this issue behind us. – WashingtonPost

Arrasas: Governor Kasich, after the last presidential election, the Republican Party realized that in order to win the presidency, it needed the support of Latinos. Guidelines as to how to accomplish that were spelled out in an autopsy report that concluded, and I’m going to quote it, “if Hispanic-Americans hear that the GOP doesn’t want them in the United States , they won’t pay attention to our next sentence.” So do you think that your fellow Republican candidates get it?”

Kasich: Well, I’m not going to talk about that. I mean, I’ve got to tell you, I was with this little 12-year-old girl, was at a town hall meeting, and she said, “You know, I don’t like all this yelling and screaming at the debates. My mother’s thinking, ‘I might not be able to watch the thing anymore.’” I think we ought to move beyond that, about what they think. I’m going to tell you what I think. My position on this whole immigration issue has been clear from the beginning. I haven’t changed anything with it. And, look, my view is, we need economic growth. Everything starts with economic growth. And how do you get it? Commonsense regulations, lower taxes for both business and individuals, and, of course, a fiscal plan that balances the budget. That gives you economic growth. I did it when I was in Washington as the Budget Committee chairman, negotiating actually with Democrats – that gave us surpluses, economic growth, and the same thing in Ohio. But here’s the thing that I believe: economic growth is not an end unto itself. We have to make sure that everybody has a sense that they can rise. Of course, our friends in the Hispanic community, our friends in the African-American community – the promise of America is that our system, when we follow the right formula, is going to give opportunity for everyone. It’s what Jack Kemp used to say: “a rising tide lifts all boats, not just some boats, but all boats.” And you know what? With me and the Hispanic community, I think they like me, and I appreciate that, because I want them to have the same opportunity that I and my children and my wife and the people we love have had in this country. It’s time to solve problems.” – WashingtonPost

“I want people to know that we can find areas of agreement and if we don’t, we will not fix Social Security, the border, we’ll not balance the budget, and we will continue to be able to divide ourselves and the problems keep getting kicked down the road.

If I’m president, within the first 100 days, I will have conservative ideas, I will — I will unite the Republicans, but I’ll tell you what, I’ll set the tune, but we’re going to let some Democrats come and play in the orchestra, because we are Americans and we can do it together.” – FoxNews

Kasich: “And that is really key in getting things done. If we’re going to balance a budget, fix the border, fix Social Security, deal with student loans – any of these other things that are out there, you’ve got to do it together. Reagan had the boll weevils, which were the conservative Democrats. Kasich had the blue dogs when I was fighting to balance the budget, the conservative Democrats.”

Cooper: “Were you surprised that the pope weighed un on the campaign with his “building walls” comment?”
Kasich: “…He is the essence of humility. And he has opened the wall and the doors of the church to lots of people who didn’t understand it. We have a right to build a wall but I got to tell you we have too many walls between us. We need bridges between us if we’re going to fix the problems in Washington.” –  CNN

“As this economy gets stronger, I believe we have an obligation to help people who live in the shadows. For the 11 and a half million who are here, if they have not violated the law since they’ve been here I’d give them a path to legalization.” – Live5News.com

Kelly: “Let me ask you about immigration. That’s an issue we hear about a lot with you. At that one debate you got up there, what are we going to do, think about the children. Trump’s plan, this plan by others have them all yanked out, illegal immigrants, it’s not realistic, and a lot of Republicans groaned at that saying, he’s too weak on immigration.

” Kasich: “Well, I don’t think I’m weak. I’ve done, like I say, I’ve been all over the country and when you spend — when you do 106 town halls with people here and so many other kind of meetings, Megyn, look, what’s practical, finish the border, don’t let anybody come in that’s not permitted. If they come in, you gotta send them right back. Have a guest worker program. And for the 11.5 million who are here, if they’ve not violated the law since they’ve been here give them a path to legalization, not the citizenship and let’s get this issue behind us. I believe that’s the right — the right approach. I think the American people, my guess is I don’t want to speak for the American people, but I think they think it’s reasonable, and I think you could pass it through the Congress. Let’s get it done. I’d like to get it done in the first 100 days.” – FoxNews