Here’s what Ted Cruz, U.S. Senator from Texas, is saying about immigration: 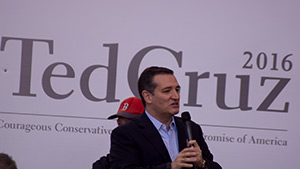 “We will repeal Obamacare, abolish of IRS, secure the border, and bring back jobs.” – WashingtonPost

“The people that get forgotten in this debate over immigration are the hard-working men and women of this country. Millions of Americans are losing their jobs, millions of legal immigrants who are losing their jobs or seeing their wages driven down. You know, the past couple of weeks, the Wall Street Journal had a very interesting article about the state of Arizona. Arizona put in very tough laws on illegal immigration, and the result was illegal immigrants fled the state. And what’s happened there, it was a very interesting article, some of the business owners complained that the wages they had to pay workers went up. And from their perspective, that was a bad thing, but what the state of Arizona has seen is the dollars they’re spending on welfare, on prisons, on education, all of those have dropped by hundreds of millions of dollars, and the Americans, and for that matter, the legal immigrants, who are in Arizona, are seeing unemployment drop, are seeing wages rise. That’s who we need to be fighting for. Listen, we have always welcomed legal immigrants, but I think it is a mistake to forgive those who break the law, to allow them to become U.S. citizens, and that’s why I’ve led the fight against granting citizenship to those here illegally, and that’s why I will do the same thing as President.” – WashingtonPost

When I say I’ll stop illegal immigration and secure the border, you can trust me! –  Via Twitter

RT if you agree we need a president we can trust to secure the border and stop illegal immigration! – Via Twitter

“You know, a few minutes later we had an exchange with Marco Rubio – and listen, I like Marco. He’s charming, he’s a friend of mine, he’s very, very talented. But, what I said, and my focus is on record, and substance, and issues, and vision for this country. I think that’s what the voters are interested in.

But, I made three statements about Marco’s immigration record in the debate. I said, number one, Marco right now supports granting citizenship to the 12 million people who are here illegally.

Now, that is a fact. He said that on the debate stage two or three debates ago. In fact, on Meet the Press with Chuck Todd just a few weeks ago Marco said we should grant citizenship to people here illegally even if they have criminal convictions. He said that on national television looking into the t.v. camera.

The second thing I said is I said when he was in Florida, he supported in-state tuition for illegal immigrants.  That’s a fact.  That is his legislative record.

Now, in response to that, Marco followed the same strategy as Donald, he just screamed liar, liar, liar.  He didn’t actually dispute any of the substance.  You remember what he said at the same time was, well, how would you know what I said on Univision?  You don’t speak Spanish.

Well, Marco was incorrect on that.  But, look, truth matters.  Every one of these issues, Donald and Marco are on video on national television stating their positions.  And just yelling liar doesn’t make it so.

So what’s unlikable is when you stand up and say, how about we do what we said we would do?  Likewise, when I stood up and led the fight against Obamacare, they said that was unlikable.

When I stood up and led the fight against the Rubio-Schumer amnesty bill, they said that was unlikable.  You know why?  Because all the money in Washington, all the lobbyists in Washington wanted amnesty.

If you look at K Street, if you at the special interests, if you look at Wall Street, amnesty they think is great.  It’s cheap labor.  And so when you actually stand up – and by the way, the way we won these fights is that I stood up and tried to shine a light on them, shine attention on them and empower the American people.

So, for example, amnesty, Rubio-Schumer amnesty passed the Senate.  Every Democrat voted for it.  And a whole bunch of establishment Republicans.  And it was headed to the House to pass.

House leadership, John Boehner, intended to take it up, pass it with all the Democrats and a handful of Republicans, roll over about 200 House Republicans.  And I stood with Jeff Sessions and Steve King and we took the case to the American people.

And what happened is millions of American people rose up, lit up the phones to Congress and said, don’t do this.  And we defeated the Rubio-Schumer amnesty bill in the House.” – CNN

“For far too long, the Obama administration has discouraged enforcement of our nation’s immigration laws. President Obama has even personally threatened ‘consequences’ for the dedicated men and women who try to follow the law.” Sen. Cruz continued, “This legislation (ICE Agent Support Act of 2016 (S. 2538)) sends a clear signal of support to the ICE agents who risk their lives on a daily basis to enforce our nation’s immigration laws. The next administration must support the people who protect us from illegal immigration and punish those who break our laws.” – Cruz.Senate.gov

“In terms of a practical solution, I’ve laid out the most detailed plan for solving illegal immigration. It’s 11 pages, single-spaced, chapter and verse. It’s on our website, tedcruz.org.

We’re going to increase four-fold, the fixed-wing and rotary-wing aircraft, so that you have technology monitoring an attempted incursion to direct the boots on the ground where they’re occurring. We’re going to put in place a strong e-verify system in the workplace, so you can’t get a job without proving you are here legally.

We’ll put in place a biometric exit-entry system on visas, because 40 percent of illegal immigration comes not over the border illegally, but people coming on visas and overstaying.

We will end sanctuary cities by cutting off taxpayer dollars to any jurisdiction that defies federal immigration law.” – NewYorkTimes