Here’s what Ben Carson, an author, surgeon and philanthropist, is saying about immigration: 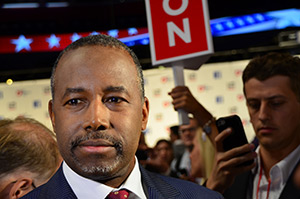 Legal immigration will always be a valued pillar of our society, but we must do better to protect our homeland and ensure our security. – Via Twitter

The overwhelming majority of Americans want our borders secured and our immigration laws enforced by the government. –  Via Twitter

Our immigration system is broken. The debate on immigration is characterized by racial pandering & political giveaways and not common sense. – Via Twitter

We are a nation of immigrants, but we are also a sovereign nation of laws. Our sovereignty demands that we protect our borders. –  Via Twitter

As President, I would work closely with Congress to design and enact legislation with the goal of solving our illegal immigration crisis. – Via Twitter

“As President, my top domestic priority will be to stop illegal immigration. We must secure our border to ensure the safety of our people.” – Via Twitter

“We are a nation of immigrants, but we are also a sovereign nation of laws. Our sovereignty demands that we protect our borders.” – Via Twitter

“Our nation faces grave national security threats. We must act decisively to protect American citizens from terrorists at home and abroad.” – Via Twitter

Over the centuries, immigrants of all stripes have come onto our shores, inspired by our ideals and seeking opportunities available only in this country. We have opened our doors to the world, and the world has in turn shaped our culture and heritage and helped create the rich diversity that is one of America’s greatest strengths. BenCarsonSays.com

As president, I will repair our broken immigration system by securing the border, implementing sensible admission and removal procedures, solving the problem of the existing illegal immigrant population, and restoring the concept of the American melting pot. – Via Facebook

America is a beacon of freedom and hope to the world. Millions of immigrants have come to our shores inspired by our ideals & opportunities. –  Via Twitter