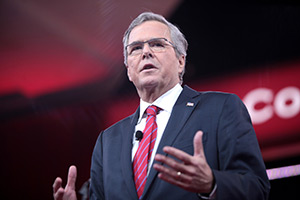 “Let me get this out of the way, and then I’ll get to something more positive. The front-running candidate for the Republican Party is that kind of [negative] politician. Donald Trump organizes his campaign around disparaging people as a sign of strength. It’s not strong to insult women, it’s not strong to castigate Hispanics, it’s not strong to ridicule the disabled, and it’s certainly not strong to call people like John McCain or my friend Leo Thorsness, the Medal of Honor recipient who spent six years in a POW camp in Hanoi — it’s not strong to say they were a loser because they got caught.” “I think we need a president that actually believes in the American people, that won’t push everybody down to make themselves look good.” – BostonGlobe

The questioner started off by attributing the “slow start” to Bush’s campaign to his “politically incorrect” depiction of undocumented border-crossing.

“That’s not politically correct,” a visibly annoyed Jeb shot back, interrupting the questioner. “You don’t think that 99 percent of the people who come to this country are just trying to put food on the table for their families?”  The questioner tried again. “Do you believe in the rule of law –” “Yeah, I do,” Bush snapped.  The candidate then acknowledged that illegal immigration is a problem while defending migrants’ motives. “They’re coming here because they want to put food on the table for their families, and if you think that’s politically correct you haven’t been following my life. That’s totally politically incorrect right now! The fact that I would say something that’s totally obvious to people who know anything about the immigrant experience but incurs the wrath of people who are angry about this is politically incorrect.” – DailyBeast ~~Feb 7, 2016 We should have a path to legal status for the 12 million people that are here illegally. It means, come out from the shadows, pay a fine, earn legal status by working, by paying taxes, learning English. Not committing crimes and earn legal status where you’re not cutting in front of the line for people that are patiently waiting outside. – WashingtonPost