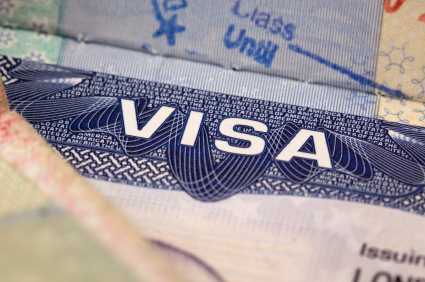 Nonimmigrant visitors who remain in the United States past their approved duration of stay typically are unable to file for extensions, changes or adjustments to their status. If they leave the U.S., they may find themselves barred from re-entry for 3 to 10 years. However, certain immediate relatives may be eligible for an exemption, or waiver, that allows for an adjustment of status. Spouses are included in those immediate relatives eligible for the exemption.

The lawful duration of a nonimmigrant traveler’s visit to the U.S. depends on the information indicated on their Arrival/Departure Record. This may be a

On the I-94, U.S. Customs and Border Protection records each visitor’s admission number, their admission date, their class of admission and an end date for that visit. The end date is referred to as a duration of status.

Remaining in the U.S. past the end date indicated on the I-94 is commonly referred to as overstaying a visa. This is because the end date associated with the traveler’s Arrival/Departure Record supersedes the expiration date on the traveler’s visa. The visa gives permission for a traveler to request entry to the U.S., but the Arrival/Departure Record documents the entry and specifies the acceptable, lawful duration for each visit.

Consequences of Overstaying a Visa

Nonimmigrant travelers who remain in the U.S. past the end or duration date associated with their Arrival/Departure Record become unlawfully present and face legal consequences. U.S. Immigration and Enforcement has the authority to remove individuals who overstay and do not leave of their own volition. In addition, individuals who overstay but then later voluntarily leave the U.S. may find themselves barred from re-entry to the U.S. for years:

Exceptions to these barring rules of unlawful presence due to a visa overstay and future inadmissibility, however, are available to certain individuals who qualify.

The Department of Homeland Security Policy Manual recognizes that “some or all of the adjustment bars do not apply to certain categories of adjustment applicants.” Specifically, individuals who qualify as a U.S. citizen’s immediate family are exempt and are still considered admissible and eligible to apply for an adjustment of status: that is, Permanent Resident Status and a Green Card. This includes

In addition, the manual states that these individuals may be able to adjust status even if they

Additional Bars to Overstaying a Visa and Getting Married

Spouses and immediate relatives who exceed their duration of stay may be able to benefit from exemptions to adjust status, apply for permanent resident status and receive a Green Card. However, these exemptions do not excuse individuals from other bars, eligibility requirements or grounds for inadmissibility. For example,

To adjust status for a spouse who has overstayed their visa, couples must concurrently file three applications or petitions: