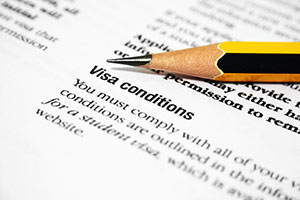 Non-immigrants traveling to the U.S. on temporary visas must carefully consider the dates of their authorized stay. The date on which the authorized period of stay will end can be found on the arrival/departure record or it will be stamped on their passports. Staying in the U.S. beyond that date will cause the non-immigrants to be out of status, so it is best to depart the country on or before the end date.

It is to be noted that the validity of a visa and the duration of stay in the U.S. are not the same. Click here to know the difference between the visa expiration date and the authorized period of stay.

Being out of status is a violation of the U.S. immigration laws. Those who overstay their authorized period of stay may become ineligible for U.S. visas in the future and may not be able to travel back to the U.S. and their visas will automatically become void.

Amit Sharma, an Indian national, applied for a B-2 tourist visa at the U.S. embassy in India. He has issued a multiple entry B-2 visa valid for ten years. This visa will permit him to travel to the U.S. multiple times. Amit traveled to the U.S. with that non-immigrant visa on June 1, 2014. At the port of entry, his visa packet was reviewed by the immigration authorities and the date on which he must leave the U.S. was stamped on his passport. The date of departure indicated on his passport is December 1, 2014, and prior to this date, Amit must depart the U.S.

In case he stays beyond the authorized period of stay, i.e. beyond December 1, 2014, he will fall out of status and this will make him removable from the country. This will also lead to the cancellation of his multiple-entry B-2 visa. If he wants to stay back in the country for a few more months, he must either file an application to extend or change his non-immigrant status, prior to the expiration of his authorized period of stay.