The U.S. is a melting pot of different cultures where people from all over the world live together and share their customs, beliefs and experiences. Immigrants from across the globe have cooked up a diverse food scene in the country and Americans have the closest interaction with the cultures of several other foreign countries through food. 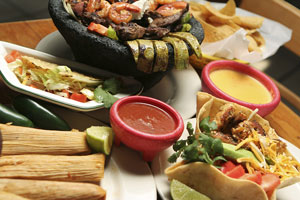 Americans generally love Mexican food and have also assimilated the Mexican cuisine into their daily eating habits. Mexican food has become very popular and profitable in the U.S. according to Mr. Gustavo Arellano, The OC Weekly’s editor. Immigration is one of the reasons for the influx of Mexican food. Immigrant Mexicans continued to cook their traditional dishes. and many also opened their own traditional Mexican restaurants here.

Following are the top five Mexican restaurants in the U.S.

Topolobampo, opened by Rick and Deann Bayless in 1989, is located on Clark Street in Chicago’s River North neighborhood. The restaurant’s dishes are organized under three categories, vibrant, soulful and enchanting, out of which the guests can choose the categories they prefer and create their own three-, five- or seven-course tasting menus. This is one of the most elegant Mexican restaurants in the U.S.

The Spanish chef José Andrés, who was named Outstanding Chef of the Year at the 2011 James Beard Foundation Awards, spent time in Mexico before he opened Oyamel in Washington D.C. The restaurant’s menu will suit every guest. Food served in the restaurant by the Spanish chef José Andrés and his small plates concept, authentic tacos, ceviches, traditional snacks and impressive desserts are very famous in the U.S. The restaurant’s menu also includes an impressive selection of tequilas and mezcales and an impressive wine list.

The Oaxacan cuisine, the regional cuisine of Mexico, was introduced to Los Angeles by the Lopez family that opened Guelaguetza in 1994. This restaurant is a year round destination for its tamales, memelas, unstuffed enchiladas, and exquisite moles. Guelaguetza is not only a restaurant, but also a boutique market and an advocates for Oaxacan culture in Los Angeles.

As the neon sign outside the restaurant declares, La Taqueria has the best tacos and burritos in the whole world. The restaurant is well known for its chorizo, lengua, and carnitas tacos, bean and cheese burrito and rice-free burritos.