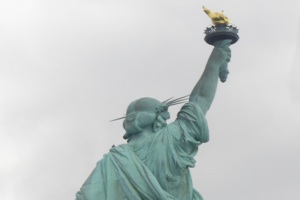 Two senators on opposing sides of the political process are proposing comprehensive immigration law reform that would include a path to US citizenship for approximately 11 million illegal immigrants currently living in the United States.

Republican Lindsey Graham from South Carolina and Democrat Chuck Schumer of New York have offered up similar proposals on two different Sunday news programs saying that no path to citizenship could be offered until the borders of the United States had been secured.

Only then could those living in the United States without authorization “come out of the shadows, get biometrically identified, start paying taxes, pay a fine for the law they broke,” Graham told Face the Nation on CBS.   “They can’t stay until they learn our language, and they have to get back in line before they become citizens.  They can’t cut in front of the line regarding people who are doing it right and it can take over a decade to get their green card.”

Meanwhile on Meet the Press over on NBC, Schumer was saying that he and his Republican counterpart had resumed talks that had broken off a couple of years ago in regards to immigration policy and have come up with “a comprehensive detailed blueprint on immigration support” that could genuinely gain bipartisan support.

Immigration reform has once more become a major issue with Republicans trying to find a way to recover from their crushing election defeat.  Obama was supported by over 70% of Hispanic voters.