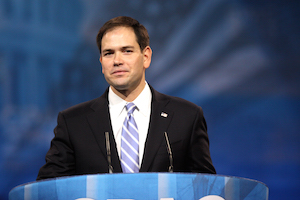 Undocumented immigrants interrupted Republican presidential hopeful Marco Rubio yesterday during his speech at the Washington meeting of the Faith & Freedom Coalition. The speech by the Florida senator was disturbed by two men who began shouting their immigration status and yelling “implement DAPA” and “protect DACA” in reference to the deferred action programs announced by President Obama.

“Why do you keep supporting the deportation of families?” one protester shouted. “We all want jobs like anyone else!” Security quickly ushered the protesters out to the sound of the crowd booing. The incident was shrugged off by Rubio, who pointed out that in the country his parents came from – Cuba ‒ such protests would be against the law. “In America people have the right to interrupt speeches,” he noted. “They have the right to be rude. They have a right to be wrong.”

Rubio’s record with regard to immigration reform is a complicated one. In 2011, when he began his career as a US senator, he seemed to be against the idea, only to change his stance in 2013 when he became one of the Gang of Eight architects behind the Senate comprehensive reform bill. He then turned against this bill after the House of Representatives refused to bring it to a vote.

Rubio now says that he supports the idea of a piecemeal approach to immigration reform that would offer undocumented immigrants a pathway to legal status but would cancel the executive actions announced by Obama last year.