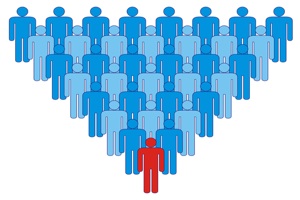 The majority of the population of the United States will not be white by the year 2043, according to brand new census projections.  There is a historic shift taking place that is reshaping the schools, workforce and electorates of the country.

The official forecast was released by the Census Bureau on Wednesday and now puts the tipping point for the loss of white majority around a year later than was forecast in previous estimates, because of the impact made by the recent economic downturn.

The United States is becoming more and more diverse because of a higher rate of birth among immigrant communities, especially Hispanics, who entered the country at the peak of the 1990s and early 2000s immigration boom.  However, since the housing bust in the mid 2000s, there has been a slowing of new arrivals from Mexico and other countries.

The changing demographics of the United States has some stark implications for the political landscape, something that was demonstrated loud and clear in last month’s Presidential election, where Barack Obama was able to score a second term thanks at least in part to his support from as much as 78% of non-white voters.

There are also economic and social ramifications from the US’ changing demographics, with the US Supreme Court faced with white plaintiffs who argue that the raft of special protections for ethnic and racial minorities that date back to the 1960s, such as affirmative action in college admissions, may now no longer be needed.