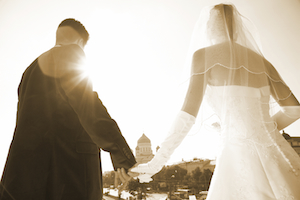 The number of international marriages in the United States is on the increase. In 2010 there were over five million marriages performed where one of the spouses originated from a different country, with a number of different factors including the globalization of business and commerce accounting for this trend.

The K-1 US visa is available to people who want their fiancé to be granted entry to the country.  It stipulates that the couple has to be married within 90 days of the immigrant entering the United States, and that the fiancé would have to then leave the country within 30 days should that stipulation not have been met.  Once the marriage has taken place, however, the individual can then put in an application to become a permanent resident.

The great majority of people that apply for the K-1 US visa are approved, with 95% of requested visas receiving approval in 2009. The biggest demographic group to enter the country with these US visas comes from Russia and Ukraine, which are not usually countries that witness large swathes of immigrants leaving to come to the US.

Individuals who are newly married can start the procedures involved in changing their legal status in order to gain permanent residency within the United States straight after the marriage, or they can instead put in an application for an employment authorization. The ownership and safety of the estate of the US citizen could be in jeopardy if their immigrant spouse is not a citizen, so these are important steps to take.