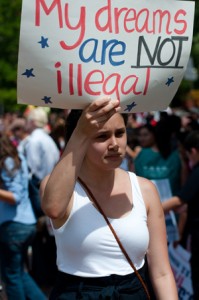 David Martinez came to know that he was an undocumented immigrant when he was in high school. He was born in Mexico and brought up in a town near Los Angeles. He was only three months old when his aunt brought him to the U.S. illegally.

When he was in school, he always wanted to be more associated with American kids and he also loved to dress like those kids. Since he spoke good English, played sports and got good grades in school, he believed that he was a typical American kid. In the freshman year, he was required to provide his Social Security number when the clerk was going through his paperwork. That was when he came to know that he was not an American. His parents told him that he was undocumented when he asked them about his Social Security number.

Only then Martinez realized that he will not be able to get a driver’s license or summer jobs. He applied for deferred action after the Deferred Action for Childhood Arrivals (DACA) program, allowing certain eligible undocumented youth to apply for a relief from deportation, was implemented by President Obama. His application for deferred action status was approved in December 2012, after which he was able to get a job and a driver’s license.

Martinez can now renew his temporary status as USCIS has announced the renewal process for DACA. DACA recipients like him will need to file Form I-821D, Consideration of Deferred Action for Childhood Arrivals along with Form I-765, Application for Employment Authorization for work permits and Form I-765WS, Worksheet, similar to how they filed their initial DACA requests, to get their temporary status renewed. These forms must include the right filing fees and must be filed around 120 days before their current DACA status expires.

Though Martinez has received this temporary status, he is still unable to travel outside the U.S. He wrote on CNN iReport that Mexico would be the first place he would visit if he is allowed to travel abroad. He also wishes to live here as an American.

There are many others like David Martinez who are longing to achieve their American dream. Though they have been brought up in the U.S. just like the other American kids, they lack legal immigration status which prevents them from calling themselves “Americans”. They believe that they belong to the country and though they were illegally smuggled into the U.S., their “American dream” is not illegal.