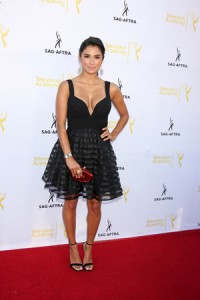 Diane Guerrero, who plays Maritza Ramos in “Orange Is the New Black,” is the daughter of Columbian immigrants. Her parents came to the U.S. from Columbia to escape a dire economic situation. They moved to New Jersey as some of their friends and relatives lived there. Later they moved to Boston after Diane was born.

Diane spent her whole childhood worrying about her parents’ immigration status, until one final day, they were deported. One evening, she returned home from school to see her empty house. She came to know that her parents and brother were placed in deportation proceedings from her neighbors. She said that her parents tried their best to legalize their status. They had spent on people who called themselves attorneys believing that they would help them and protect them from deportation. But no one helped them and eventually, they were deported from the U.S.

As Diane was born in the U.S. and is a U.S. citizen, she was not removed from the country. She then had to take care of herself with no one to help or take care of her. As her parents did not have an attorney to legally represent them, they did not get a chance to fight deportation.

Diane was able to continue her education at Boston Arts Academy with the help of the parents of her friends. She worked in retail stores and coffee shops to support herself through her high school. After her parents were sent back to Columbia, she was only able to make short phone calls to them and meet them during her summer vacations. However, that was not sufficient and her parents missed all the important events that took place in her high school and college.

Diane says that her story is too common as there are many other children in similar situations. There are many U.S. citizen children who the U.S. immigration system has separated from their families. Children separated from their families end up in foster care with no one to take care of them and guide them. She says that the country should not separate children from their parents and is urging President Obama to quickly take action and provide them with deportation relief. She says that the country must remember its core value of keeping families together.

According to Diane, the U.S. Congress must come up with a permanent legislative solution to keep families together. In the meantime, the President must act on his own and provide temporary relief and stop separating families. The Colombian-American actress, Diane Guerrero who now volunteers with the Immigrant Legal Resource Center recently described her experiences to the Los Angeles Times.