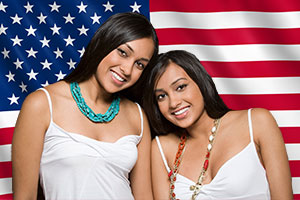 To sponsor a sister, the U.S. citizen must file Form I-130, Petition for Alien Relative. This petition must include copies of birth certificates of the petitioner and the beneficiary. This is to show that they have at least one common parent.

A copy of the marriage certificate of the stepparent and the natural parent must be provided by a U.S. citizen sponsoring a sister related through a stepparent. They also need to submit documents showing that the prior marriages of the natural and the stepparent were terminated before they entered into the current marriage.

If the U.S. citizen and the beneficiary have a common biological father but different mothers, copies of marriage certificates of the father to each mother and copies of divorce papers to prove that any prior marriages of the father or mothers were legally terminated, must be submitted.

Unfortunately, sisters of U.S. citizens do not have the privilege to immigrate to the U.S. immediately like the U.S. citizen’s husband or wife. Sisters belong the fourth preference category for which the wait times are too long. Depending on their country of birth, they will have to wait for ten years or even more to get an immigrant visa.