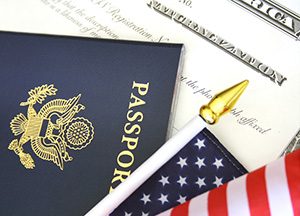 Falsely claiming US citizenship is an offense under the federal immigration law. Immigrants who falsely claim US citizenship will be permanently barred from entering the United States. Criminal charges will be filed against people who do so.

Permanent residents are granted several rights but they are not given the right to take part in the civic life by casting their votes in federal elections. If the immigrants who are prohibited from doing so, register to vote, they will be removed from the country.

While completing Form I-9, Employment Eligibility Verification form, immigrants should mention their exact status in the country and not state that they are US citizens. Similarly, it is an offense to obtain a US passport. Only the US citizens can obtain US passports.

Certain federal and student loans are available only to the citizens of the United States. Claiming to be a US citizen on loan applications and to obtain other benefits that are meant only for US citizens, are offenses under the federal immigration law. These offenses would result in deportation.

Undocumented immigrants and people who overstay their non-immigrant visas, at times falsely claim US citizenship to remain in America. These foreign nationals will be granted waivers if they immediately retract the false claim and may not be deported for claiming citizenship. Though they may not be removed from America for this reason they will be placed in removal proceedings for unlawful presence or for other reasons.