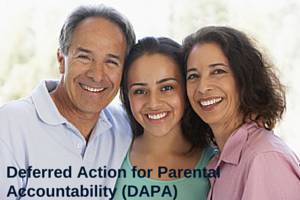 Under President Obama’s immigration reform plan, certain undocumented parents will get an opportunity to avoid deportation and obtain temporary legal status in the U.S. The Deferred Action for Parental Accountability (DAPA) program grants undocumented adults, who have children who are green card holders or U.S. citizens, an opportunity to avoid deportation and remain legally in the U.S. for a three year period.

Undocumented adults will be allowed to request deferred deportation and work permits if they have lived in the U.S. since January 1, 2010 and if their U.S. citizen or legal resident children were born on or before Nov. 20, 2014, the date on which the President announced his immigration reform plan. These undocumented parents must pass a criminal background check and must not belong to the deportation priority list.

U.S. Citizenship and Immigration Services (USCIS) will soon publish forms that must be filed by those eligible for this temporary status. However, that may not happen immediately and USCIS might take around six months from the date on which the President announced his reform plan to publish applications. USCIS will handle applications on a case-by-case basis similar to how is it handling requests for deferred action status under the Deferred Action for Childhood Arrivals (DACA) program.

People who believe that they are eligible for temporary legal status under DAPA can start collecting supporting documents that will help them establish that they are eligible for this temporary status. They can also start saving some money for the application filing fee. They will have to pay $465 for work authorization and biometrics, according to U.S. Department of Homeland Security (DHS) Secretary Jeh Johnson. Similar to DACA, fee waivers will not be granted and fee exemptions may be granted only in limited circumstances.

Though the DAPA program is a huge step forward, it has left out a lot of immigrants. Immigrants who are single and immigrants in LGBT communities will not become eligible for lawful status under this program. They may have been living here for several years and they may meet all the other requirements but cannot apply for lawful status under DAPA just because they do not have children born in the U.S. or who are legal residents.

Immigration advocates say that the President’s immigration plan is not a complete solution as it has left out more than six million undocumented immigrants who have been living here for decades and contributing to the country.

Applications for DAPA have not yet been published by USCIS but the potential DAPA applicants can start preparing their supporting documents that include their credit card bills, lease agreements, school and medical records that will help them show that they have been living here since January 1, 2010.