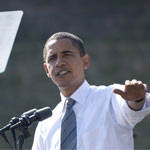 President Obama is facing political stalemate in the last two years of his presidency following the Republican Party expanding its majority in the House of Representatives and succeeding in its bid to gain control of the Senate in Tuesday’s midterm elections.

The Republican Party won a further seven seats on Tuesday, putting it in the majority, with CNN and Fox News predicting that the party has also gained seats in the House of Representatives. One of the biggest factors in the disastrous result for the Democrats was the current unpopularity of the president. Just 44% of voters gave their approval to Obama’s performance in an NBC News exit poll, with 54% openly disapproving.

Democrat candidates were slammed by their Republican opponents in a number of highly-competitive Senate races as being too close to Obama, which is a tactic that appears to have worked in a number of vital states including Arkansas, Iowa, Montana, West Virginia, Colorado, Kentucky and North Carolina. Strategists for the president insist that there could be still be progress made on the bid to enact comprehensive immigration reform, although the changing of the political landscape seems to make this more difficult than ever.

The primary goal of immigration reform for many conservatives is border security, with most against the broader approach favored by the president of limiting deportations and offering a pathway to citizenship or legal status to those undocumented immigrants already in the country. Obama is still tipped to use executive action on the issue; however, he faces fury from increasingly powerful conservatives if he does.